Stryker, a world leader in the medical technology and surgical device industry, has always placed a fundamental value on developing innovative products and services that ultimately improve the lives of patients. 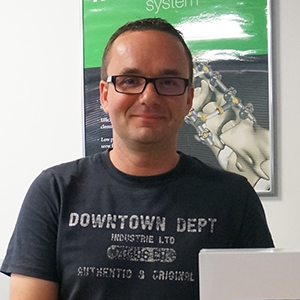 The ProfitMilling technology has made open-pocket machining of the uncut material and contouring of the freestanding part possible, it is a real time-saver and saves wear and tear on the tools!

They offer a diverse array of medical technologies, including reconstructive, medical, surgical, and neuro-technology and spine products to help people lead a more active life.

To provide minimally-invasive equipment and high-quality products, it is essential to acquire the best technology for production. To meet these objectives, they chose to use ESPRIT, a computer-aided-manufacturing (CAM) software that comes equipped with a full-spectrum programming system that is compatible with various machine tool applications.

The history of Stryker

Stryker was founded in 1941 by Dr. Homer Stryker, an orthopedic surgeon from Kalamazoo, Michigan. Today, Stryker employs 25,000 people across 60 sites and distributes its products in more than 120 countries. The parts and services they produced range from joint, prosthesis, implants and surgical navigation systems, to endoscopy and emergency room equipment. Without a doubt, everyone at Stryker is working hard to achieve the same mission.

However, when it comes to the production process, each manufacturing site operates differently to fulfill the various needs of their customers. Before using ERSPRIT, Stryker Spine in Bordeaux, France was creating parts for spinal surgery using manual programming, plus several shaping and finishing tools. With five buildings and 330 employees, the French subsidiary is in charge of the entire chain of manufacturing, from design to expedition of the finished parts. With a high-pressure job of producing parts that people rely on for the rest of their lives, Stryker Spine in France was ready to revolutionize their process of production.

The workshops are composed of latest models of turning machining centers and machine tools such as Mazak Integrex, or DMG DMU. These machines produce plates for the cervical and lumbar spine from titanium, spacers or brackets from PEEK, as well as instruments and bone screws. It's clear that the manufacturer's expertise is based on precision, controlling free-form surfaces and materials that are difficult to machine, by overcoming numerous manufacturing difficulties.

In 2006, the decision makers of Stryker decided to welcome ESPRIT into their world and have seen a vast improvement in their overall production and the quality of their products ever since.

”We appreciated this CAM software package that is easy to use and which offered all the applications: turning, Swiss style machining, milling, wire EDM” said Franck Duru, Methods Technician at Stryker.

Both the Stryker headquarters and the subsidiary in China have been using ESPRIT since 1997, which only made the decision to switch to ESPRIT that much easier. After the implementation of ESPRIT, in collaboration with the R&D and Quality Departments, production in the workshops progressed towards continuous 5-axis machining and free forms. Stryker was able to produce very complex parts and high-precision instruments.

There was even a rethink in the way they designed their parts, because of all the possibilities ESPRIT was providing for them. “We strive to program quickly by always reusing existing cycles; but also to simplify by families of parts, thinking about all the others that will come after, because sometimes only the dimensions are different” said Duru.

With 13 software licenses, they mainly use ESPRIT 3D programming option, as well as pattern recognition for certain products. At Stryker in Switzerland, they specialize in orthopedic implants, and operate machines using the programs developed in France with ESPRIT CAM. 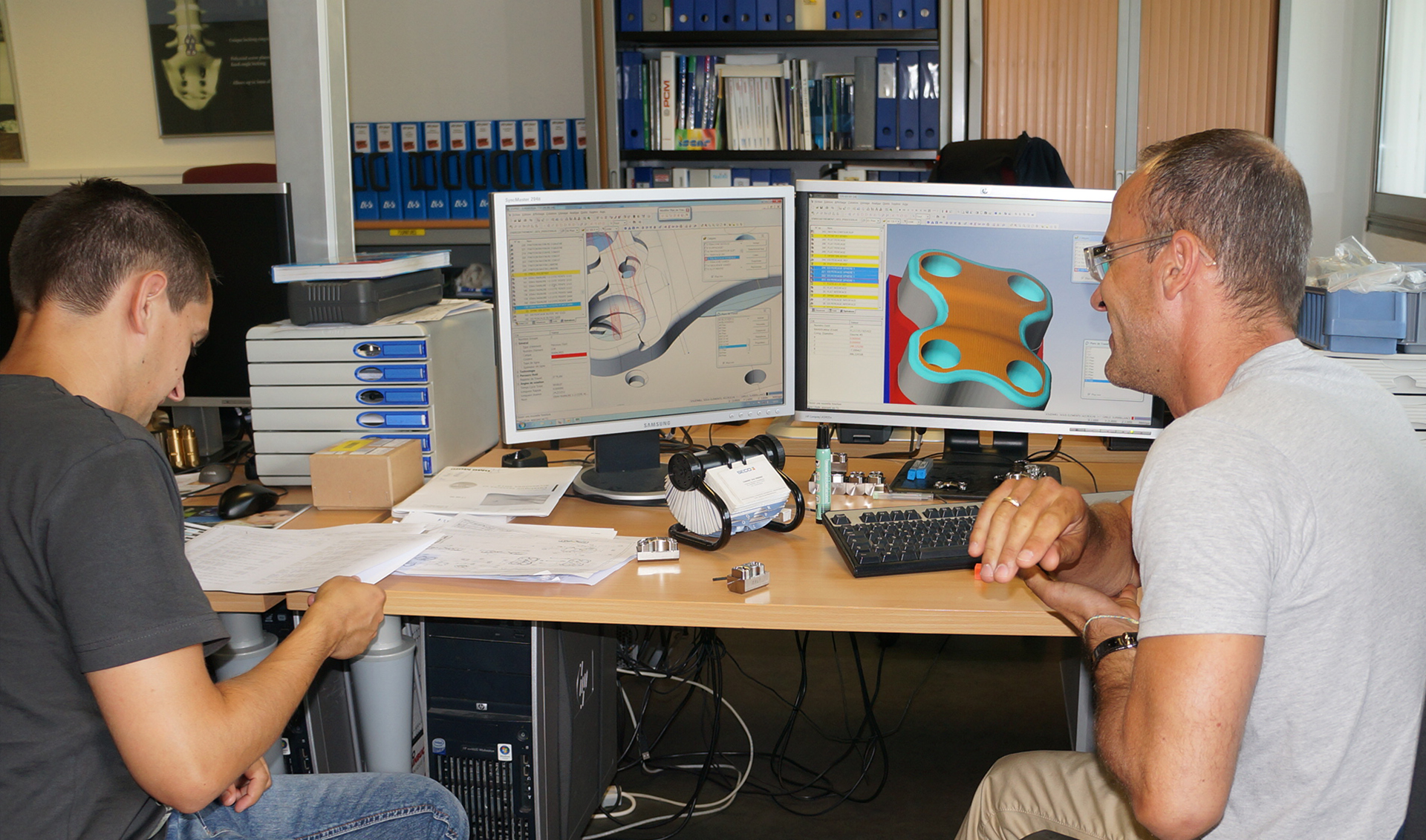 After the implementation of ESPRIT, the production in the workshop progressed towards continuous 5-axis and freeform machining.

Improvements made possible with ESPRIT

“Nothing is flat on this part, and it must be made as thin as possible so it is tolerated by the patient” said Duru, when describing a plate for a lumbar implant. “The bottom of the part is even more complex. It took me a day of programming, but without the tools provided by ESPRIT, the work would have taken several weeks. There were several stages involved in the process of 5-axis continuous machining such as, high-speed roughing with the new ProfitMilling cycle, composite milling for a better surface quality, contouring, tapping, spot facing, etc.

”ProfitMilling technology has made open-pocket machining of the uncut material and contouring of the freestanding part possible” said Nicolas Marsault, Director of Usiprog and distributor of ESPRIT. “It is a real time-saver and saves wear and tear on the tools.”

Originally, the part is designed using a computer-aided-design (CAD) software from PTC. Through the ESPRIT Feature Exchange, the CAM software gathers the entire structure from the CAD software with all the details of the part. The transmission of data is smooth and programming is more accurate.

Stryker is the only manufacturer to produce entire surgical parts from PEEK, such as the spacers placed between vertebrae before fixing plates, or brackets to block tendons. The details are minuscule and the material complicated to machine, due to the risk of burrs.

“The products come out of the robot cells in one day, whereas, before the process was automated, it took 8 days” said Cédric Lassus Debat, Machine Operator at Stryker. “The parts come out finished, sanded, engraved and ready to be shipped. The machining is done on a Realmeca turning machine and the titanium marker is inserted with ESPRIT. A robot collects the part and engraves it, then moves it to a sanding cell.” 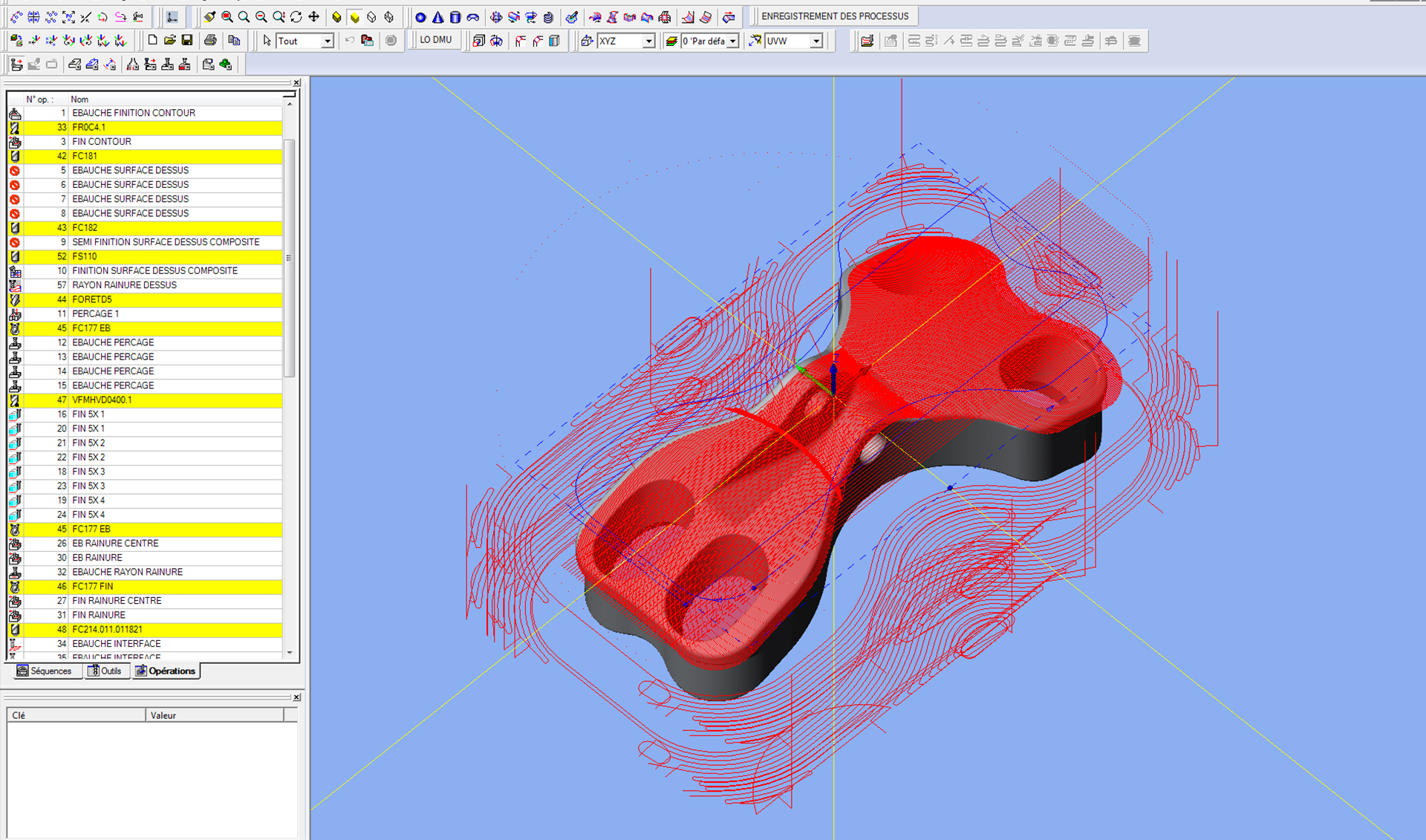 Plate for lumbar implant machined in 5-axis. Programming time: one day. This part won first prize in the competition ‘ESPRIT Contest’ in June 2014.

The availability of Visual Basic (VBA) development tools in ESPRIT enables more automation and safety. For example, through the development of a specific add-in, tool data in the interface is collected in one click, and an equipment report is made for the workshop. “Before they were entered by hand” said Duru. For parts which required 20 tools, it would take one or two hours. More than 90% of the time has been saved because checking and errors are avoided”.

Taking advantage of the ESPRIT network

The strong support provided by ESPRIT reseller Usiprog and DP Technology has contributed to the success of Stryker. Furthermore, cooperation between the software publisher and the machine builders means that licenses tailored to the machines and certified post-processors are provided.

“The post-processors provided by Usiprog are effective from installation” added Duru. The time saving is huge — more than 30%. Because Stryker chose standard post-processors from DP Technology, programmers have not needed to completely develop post-processors internally. Even when programming modifications for a new part, the risk of error is almost zero”. 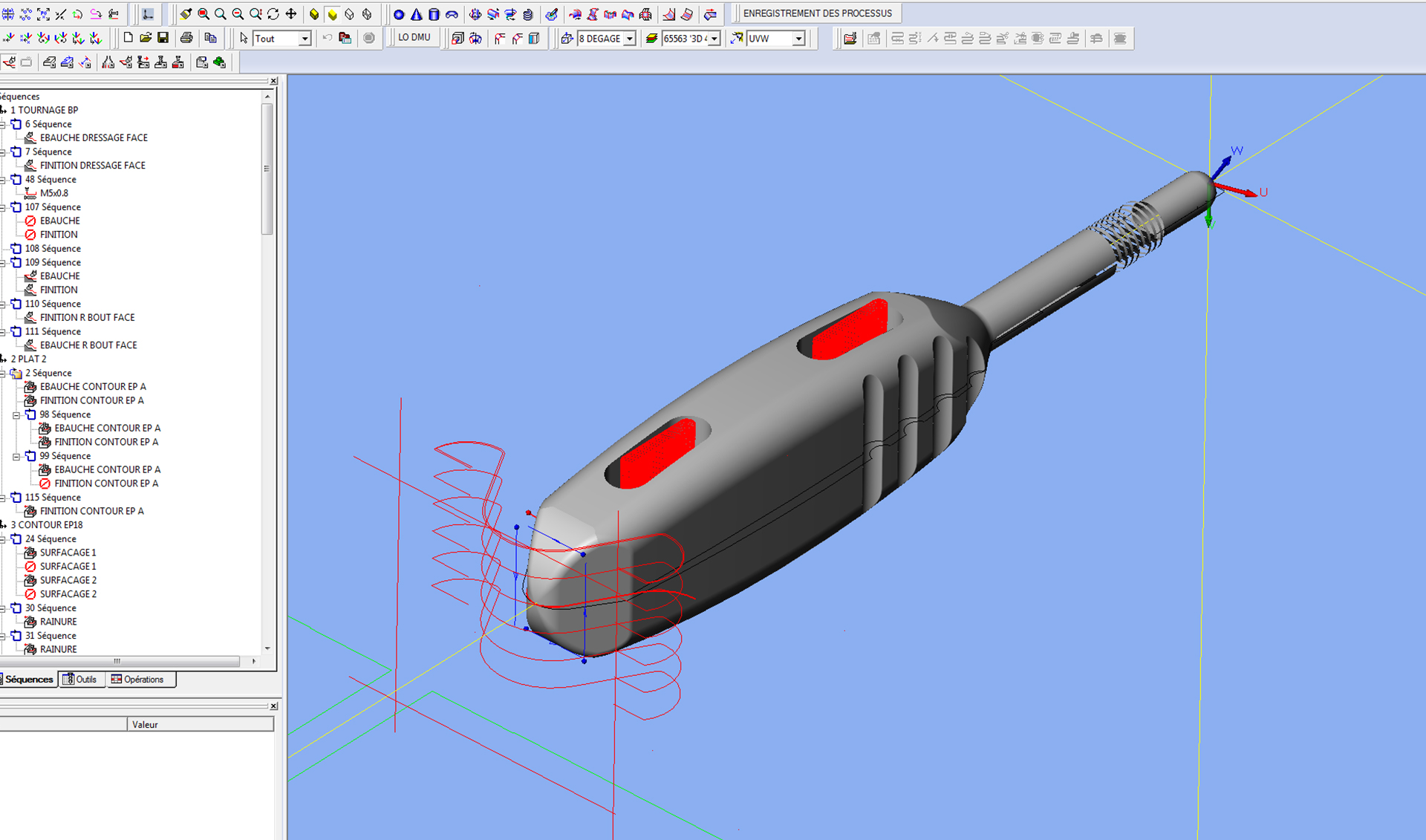 Instrument machined on a multi-tasking Stama 726MT machine, which allows the control of the size of the Spacer for implantation between vertebrae.

Stryker’s reputation in the medical world and their two-figure growth can certainly be explained by demographic trends, but mostly by enormous effort and investment in the right technology. ESPRIT Knowledge-Base Machining is the next step for the Stryker engineering team as they continuously strive to exceed their goals of production. ESPRIT KBM provides a push-button approach, which enables programmers and operators to determine the best method for machining. A real expert production system, its purpose is to decrease overall production costs while increasing productivity.

With technology being a crucial aspect of producing precision parts, Stryker Spine is thankful to have a powerful CAM software in their corner.