We decided to switch to ESPRIT CAM software because of its support for the latest machine tool features and its powerful simulation capabilities that enable us to optimize the program without taking up valuable machine time.

Paragon Medical programmers previously programmed this and other similar parts using the machine control. They entered many manual commands, including laser commands and commands to coordinate the operations of the two spindles. After completing the program, programmers weren’t sure of accuracy or collisions until they ran the part for the first time.

Balancing operations between the machine’s two spindles was also difficult. For example, programmers had no way to determine whether it was efficient to perform turning and drilling on the main spindle and perform a secondary operation on the sub-spindle at the same time. If time is money, then these decisions were doubly important. One spindle often sat idle until the other finished its operation.

“We decided to switch to ESPRIT CAM software because of its support for the latest machine tool features and its powerful simulation capabilities that enable us to optimize the program without taking up valuable machine time,” says Dale Akerley, advanced manufacturing department leader at Paragon Medical. 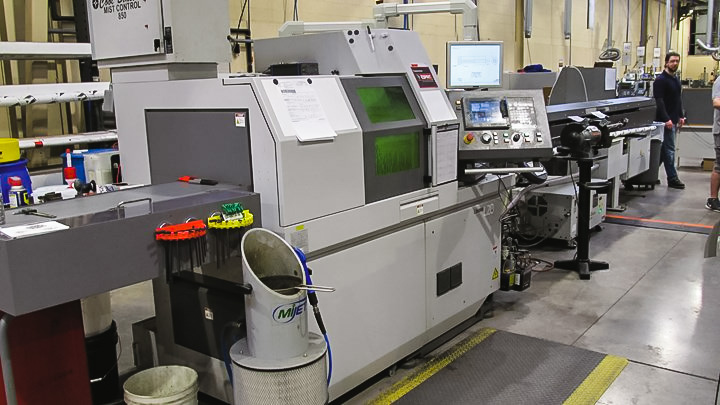 Dale began programming the tubes with ESPRIT by importing the SolidWorks CAD file that was provided by the customer. Importing the part geometry saves time and minimizes errors by ensuring that the program matches the customer’s original vision. ESPRIT then analyzes the imported geometry and automatically recognizes all the features, such as the holes and boots we mentioned earlier.

Dale selected each feature of the part and picked a tool to machine from a graphical representation of the Citizen Swiss lathe. The knowledge base, included with the software, automatically generates typical machining parameters including cutting speed, feed rate, and depth of cut. Both the detailed features on the front end of the part and the holes were produced by the laser—which can produce nearly any geometric shape to an accuracy of 0.00001 inch. When the company first began using the laser, it wasn’t supported by any CAM software, so it required time-consuming manual programming.

ESPRIT sent a technician to Paragon Medical. The technician spent days working with Dale to develop a post processor that automatically generates the instructions needed to set up the laser and perform the machining operations. With the post processor in place, Paragon Medical programmers treat the laser as if it were an ordinary cutting tool. ESPRIT then automatically generates the G-code instructions for the laser and metalcutting operations needed to produce the part.

Dale then tentatively assigned the operations to spindles and simulated the complete machining operation so he could visualize exactly how the operations are flowing and to determine if any time is being wasted.

“We can reorder operations, move operations from one spindle to another, and sync operations so they start at the same time with a few clicks of a mouse,” Dale says. He used a regrip operation to move the stock from the main spindle to the sub spindle so the 12-inch slot could be fully machined.

“Switching to ESPRIT reduced the time required to program these parts from about three days to one day, and we have achieved proportional time savings on a wide range of other parts,” Dale says. “This represents a major time saving and the time required to test the program of the machine is also greatly reduced because simulation helps us nearly always get the program right the first time. We have also achieved significant cycle time reductions by identifying idle time during the simulation and modifying the program to make it more efficient. All in all, switching to ESPRIT has helped us significantly increase the efficiency of our machining options.”