Based in southern Maine, Arundel Machine Tool serves some of the country’s most demanding industries. With more than 40 CNC machines on their shop floor, efficiency is everything—their CAM software needs to keep up. 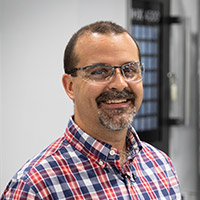 Founded in 1984 and located in southern Maine, Arundel Machine has evolved into one of New England’s leading CNC manufacturers of precision-machined components. With consistent annual investments of more than $1.5 million per year, Arundel Machine is equipped with more than 40 CNC machines including three DMG MORI NTX 2000 9-axis mill/turn machines, two DMG MORI DMU-50s, and one DMG MORI NMV3000 5-axis machining center, as well as several DMG MORI NHX4000/5000 Multi Pallet Horizontals. The company has built a fantastic team of manufacturing engineers that produce more than 1,500 CNC programs each year while also designing many custom fixtures and tooling.

Arundel Machine manufactures products to support the US Department of Defense, the US Navy, as well as others—all with stringent level one and safety critical requirements. They’re also proud to serve the oil and gas industry with level one subsea components that sustain the extreme pressures and temperatures of the ocean floor.

As Arundel Machine increased its investment in advanced technology, the company soon recognized the limitations of its previous CAM software.

“The old software was cumbersome, hard to use, did not do 3D machining very well, and lacked good technical support,” says John Hebert, engineering manager at Arundel Machine. “I flew out to the software developer’s training facility to see if these issues could be resolved, but it wasn’t possible.”

Hebert searched for an alternative that could help the company progress to the next level. He came across ESPRIT CAM software from DP Technology, which offers the ability to import a solid model from leading CAD software and use it as the basis for the CNC program. ESPRIT supports state-of-the-art technology, such as 5-axis machining, mill/turn, and probing, which is available for any class of CNC machine tool. 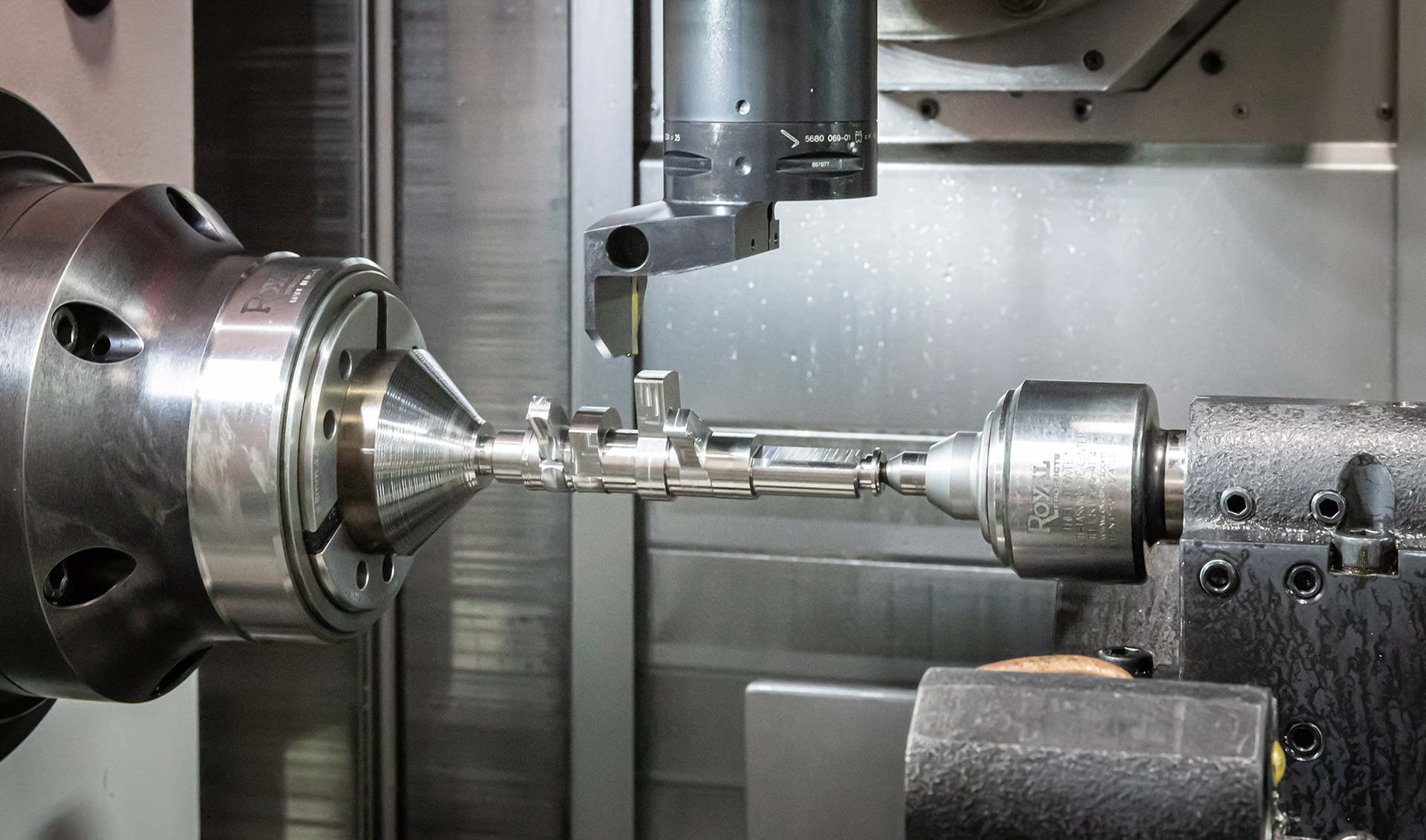 “I talked to the owners of DP Technology and was impressed by the fact that they are machining guys as much as they are computer guys,” says Hebert. “ESPRIT gave us a trial version and at the end of the trial, we were impressed and purchased the software.”
As an example of the parts that Arundel Machine successfully programs with ESPRIT, Hebert pointed to a shaft built for a defense application. The shaft had multiple concave and complex profiles, flat sections, and slots on the end of the shaft. In the past, this part would have been produced in two setups on a CNC lathe, one for each end of the part, three setups on a 4-axis machining center to produce the profiles, flat sections, and cross-hole, and one setup on a 3-axis vertical mill to produce the slot.
“Support is key to the success of any company, whether it’s mechanical support for your machine tools or technical support for your software. Partners like DP Technology, with their terrific technical support team for ESPRIT, have proven to be a valued asset. They are prompt, supportive, understanding, and always willing to help you out, while educating you along the way,” says Hebert.
Today, Arundel Machine produces this part in a single setup by leveraging the NTX-2000 Mill/Turn machine and ESPRIT CAM software. The manufacturing engineer created the CNC program by first importing the solid model provided by the customer into ESPRIT. He oriented the part and then used the CAM software to recognize the features. The software recognized most, but not all, of the 100+ features in the part. The engineer defined the rest of the features manually by changing the model to wireframe geometry, picking the edges to define each feature one by one and selecting the ‘Chain’ command. In defining roughing toolpaths, the engineer used ESPRIT’s ProfitMilling strategy, which optimizes engagement angle, chip load, lateral cutter force, and machine acceleration to reduce cycle time when cutting out large areas of stock. Profit Turning was also used for grooving out between the cams. Compared to the traditional turning toolpath, this ESPRIT cycle worked wonderfully for breaking chips, resulting in increased removal rates and longer tool life. ESPRIT’s 4-axis wrap milling is used for cutting, while the C-axis is rotated to semi-finish and finish machine the cam profiles. Other finishing operations performed with 5-axis include contouring and composite cycles.
These operations were apportioned among the machine’s two spindles in several steps: 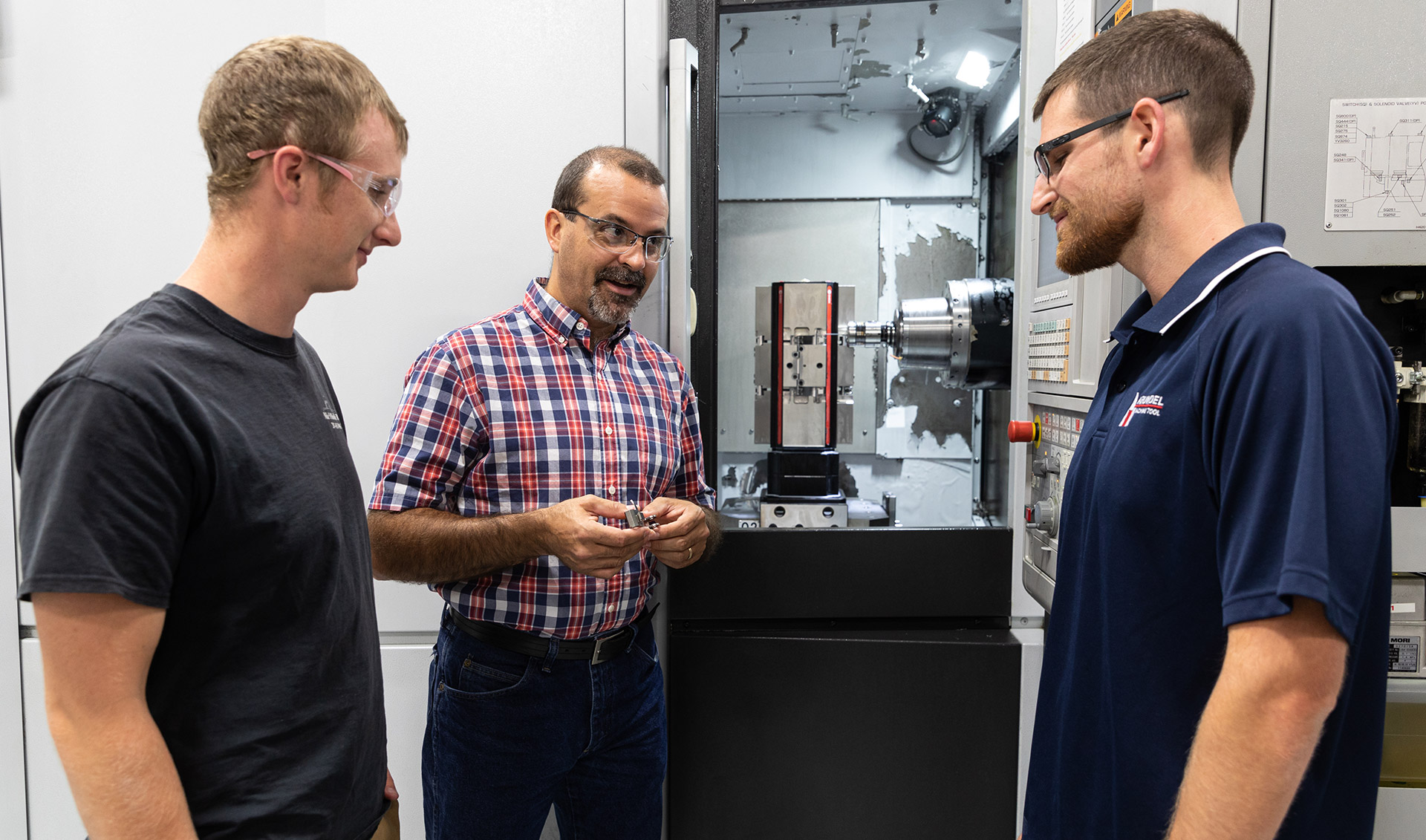 The manufacturing engineer apportioned operations between the two spindles to equalize their cycle time by dragging and dropping operations from one spindle to the others.

When the engineer was satisfied, he ran a simulation of the machining operation to check for crashes or gouging, inspected the dimensions of the machined part, and looked for opportunities for cycle time improvement. The program worked exactly as simulated on the machine and produced good parts from the very first time it was run.

“We could not have programmed this part with our old CAM software,” Hebert concluded. “ESPRIT not only provided a relatively painless programming process, but also enabled us to reduce the cycle time by 50% compared to similar but less complex parts that we programmed with our old software.”